8-bit Core Still in Use

The Intel 8051 (official designation for 8051 family is MCS-51) is a Harvard architecture, single chip microcontroller (µC) which was developed by Intel in 1980 for use in embedded systems. Intel's original versions were popular in the 1980s and early 1990s, but has today largely been superseded by a vast range of faster and/or functionally enhanced 8051-compatible devices manufactured by more than 20 independent manufacturers including Atmel, Infineon Technologies (formerly Siemens AG), Maxim Integrated Products (via its Dallas Semiconductor subsidiary), NXP (formerly Philips Semiconductor), Nuvoton (formerly Winbond), ST Microelectronics, Silicon Laboratories (formerly Cygnal), Texas Instruments and Cypress Semiconductor. 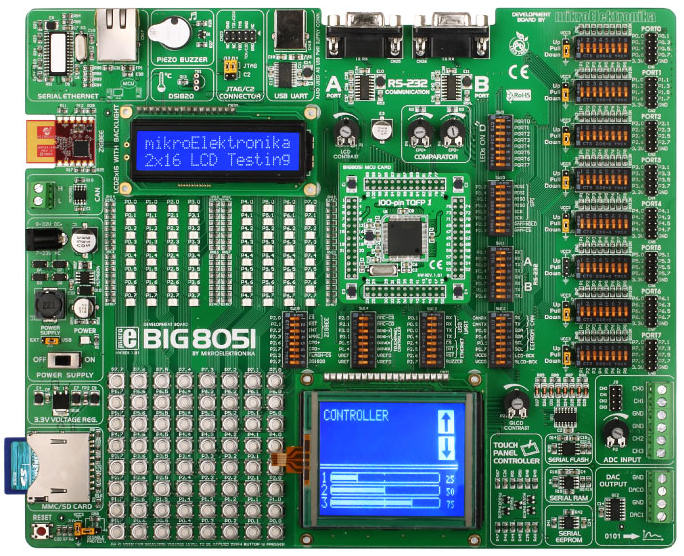 A development board for 8051 microcontrollers

8051 based microcontrollers typically include one or two UARTs, two or three timers, 128 or 256 bytes of internal data RAM (16 bytes of which are bit-addressable), up to 128 bytes of I/O, 512 bytes to 64 kB of internal program memory, and sometimes a quantity of extended data RAM (ERAM) located in the external data space. The original 8051 core ran at 12 clock cycles per machine cycle, with most instructions executing in one or two machine cycles. With a 12 MHz clock frequency, the 8051 could thus execute 1 million one-cycle instructions per second or 500,000 two-cycle instructions per second. Enhanced 8051 cores are now commonly used which run at six, four, two, or even one clock per machine cycle, and have clock frequencies of up to 100 MHz, and are thus capable of an even greater number of instructions per second. All SILabs, some Dallas and a few Atmel devices have single cycle cores.

Even higher speed single cycle 8051 cores, in the range 130 MHz to 150 MHz, are now available in internet downloadable form for use in programmable logic devices such as FPGAs, and at many hundreds of MHz in ASICs, for example the netlist from e8051 CORES.